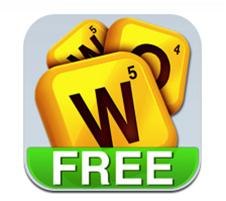 I am a noob to Words with Friends, but thought you guys might be down with it as it is basically as slow-play Scrabble rip-off for the iPhone.

You can play several games at once and they can go as quick or slow as you'd like.

My husband loves Words with Friends, and he created a word study/trainer iPhone app. It's free too, but in case anyone would enjoy it, here's the link:

If anyone wants to play with me, my username is LeBronLeLover

Oh man, that username is not going to sell it.... PLEASE PLAY WITH ME :)

Can you run more than one game on the free version too?  I've been playing my friend, Robby, in a single Scrabble match for a week now.  Ha.

Yes. You can play several games. I have 7 or so going now.

Don't have one yet.  I just have Scrabble & Scramble currently on my iPod.  I'll check this game out though and get back to you.

I hate that the board is different on Words.... the TL and TW tiles can come up in the same laydown pretty easily.

beware Words also uses a different dictionary and is riddled with cheaters.

i have a question for you about a game I'm in right now.. We are both stuck on one letter at the end of a game.  Both she and I have the letter "V" and it's impossible to squeeze it onto the board.  I'm winning by like 50 points so I don't want to give in and 'resign'.. is there anything you can do when you're stuck and there are no more 'swaps' available?

It should be just like Scrabble, where you pass your turn.  If each players passes his/her turn three times each without scoring, the game will end.

So, you just have to pass your turn until the other player finishes and/or keeps passing until it automatically ends.

Here are the basic rules for Words with Friends, directly from Newtoy.

thanks!  eventually she resigned and we started a new game.  :)

I want an iphone just for this game.  Boo Blackberry. Awesome!  With the Words with Friends board, it's a lot easier to get super "bingos" more often.

Words with Friends has it advantages and disadvantages, compared to the Scrabble app, which makes it hard to choose which one's worth keeping.  Both for now.

By the way, nice words!

I get 174 points but don't know how it is calculated. Letter Q is placed on TL and the whole word is on TW. Can anyone help to explain? Thanks!

That's you're first word, but you made two words when you added (hooked) the Y to SHARN, spelling SHARNY. So, then you would add the total score from that word onto 129 points.

But wait, there's still one more thing—your bonus points! 35 bonus points are awarded whenever a player uses all 7 tiles on their rack in a single turn, which you did with QUAVERY.

And that's how you score it.

This tool is excellent to actually learn new words, and win games like Words with friends :) i can also see how many points each word gives me.

Now i win all games :D

Learning new words is great. But if you're using tools like this against people, you should let them know beforehand. Otherwise, it's basically cheating, because most assume you won't be using these tools to play.

Can someone tell me how to delete a nonplayer from the game so I can add new players that play, I have people that haven't played in over 2 weeks and I want to dump them for good players

Not exactly an answer. I've never actually had someone stop playing against me and actually noticed it. I only pay attention to my turns. If someone hasn't played, I don't even bother with it until it moves up to my "My Turn" section. But after a little bit of digging on Zynga's helpdesk, it seems that the resign times are the following:

They also stated in this post that "...the system may occasionally fall behind, so it may take slightly longer."

But that still doesn't answer your question. There is no possible way for you to delete a game in progress. You either have to wait for the other player to resign, wait until the game is completed, or wait for the game to be automatically resigned via the above time frame.

If it has been longer than 12 (or 6) days, and your games still have not auto resigned, then it's probably a bug. It's been known to happen. Earlier this year, it was a big problem.

Zynga states that this should fix the problem if it has been longer than those time limits above:

Who wants to keep uninstalling and reinstalling apps? But I guess that's all we can do.

If that doesn't work, I suggest you submit a request to Zynga's helpdesk. Then let us know their response!

Too bad there isn't a way to let us resign games if it's the other person's turn. That would be the obvious solution. I don't know why Zynga doesn't implement this.

I've found MANY words that ARE in the Official Scrabble Players Dictionary (M. Webster.......Fourth Edition) That are NOT allowed in Words With Friends. Anybody know why?? I JUST put the word "rindy" in the search box and it wasn't allowed, but it's on page 486 as an optional variation of 'rind'. Have a whole list of these disallowed words, which have cost me MEGA points while playing.

Words with Friends uses a different lexicon than Scrabble.

Words with Friends uses the ENABLE (Enhanced North American Benchmark LExicon) lexicon, a public domain word list that many mobile word games use. I created a puzzle a few weeks ago to highlight this difference (specifically addressing lexicon variations). You should check it out, see if you can solve it.

But yeah... RINDY is not a word in the ENABLE list, but is in OSPD4. There are plenty of other words also not in the ENABLE, but Zynga does veer from the list by accepting word recommendations from users and throwing in some of their own. For instance, ZEN and TEXTING are acceptable words in Words with Friends, but are not in the ENABLE or TWL.

I sometimes use wwftool.com when I am really stuck. not to win all games, but to be able to play a nice game without endless pauzes... I still loose plenty, but really enjoy learning new words, and most of the time tell people I am using wwftool. No problems for my opponents!

That's cheating, period.  If your opponents don't mind it "most of the the time" when you tell them, well, fine.  May I delicately suggest that if you're spelling 'pause' with a 'z', therein lies your problem.

WWF is a decent Scrabble-ish game, and you can play up to 20 games simultaneously, which sounds like a lot, but many of the *random* players simply never move, or move once every three or four days.  As a Scrabble player for 30+ years, I've found the major annoyance is the accusatory sore loser, i.e., someone going on the chat function to call you a cheat.  It's to be expected, I suppose, on the Interwebz, but it's just plain annoying to have a complete stranger calling you a cheat when you're simply a skilled player.

That's exactly why I try not to play random players. I stick with friends who know I'm a Scrabble fiend... that know I've got a few tricks up my sleeve (none of which are cheating!!!!).

I'm looking for fellow words with friends players!  Challenge me: My user name is 30belowZero.  I love a good challenge!