The end game is a very important aspect of playing Scrabble. If you have just a few letters left on your rack and there are none left in the draw bag, but you're currently losing the game, you still might have a chance to win if you play your cards (er… tiles) right. No matter if you're playing a casual game at home with a friend or competing against diehards in club or tournament games, the scoring process at the end provides the same results.

The normal Scrabble rules state that "When the game ends, each player's score is reduced by the sum of his or her unplayed letters. In addition, if a player has used all of his or her letters, the sum of the other players' unplayed letters is added to that player's score." This is the rule stated in the box of all Scrabble board games, and also applies to gameplay using EA's Scrabble app on Facebook and mobile devices.

But it's only like that because there could be anywhere from 2 to 4 players in a game. In club and tournament games, there's only 2 players, so the process can be a little simpler. Instead of adding to one player's score and deducting from the other, the player who goes out simply gets double the value of whatever is left on the other player's rack. So, no matter if you're in a two-player game at home with a friend or playing competitively, the final adjustment of the scores gives the same spread difference.

It's very important to consider the final score adjustment when playing your last move, especially if you're losing. I've had my share of games where I was losing, but ended up winning by just a single point due to playing just the right move and adjusting the score appropriately. To do this perfectly, you need to track the tile usage so you know what's left on your opponent's rack. In casual play, most considered this cheating, but in club and tournament games, it's routine. You're even allowed a letter distribution list by your side.

In the Scrabble game below, you're Player A… and you're currently losing 381 to 395. You have the letters EN left on your rack. Taking in account the leftover tiles on your opponent's rack, make the best possible play to win the game after the final score adjustment. 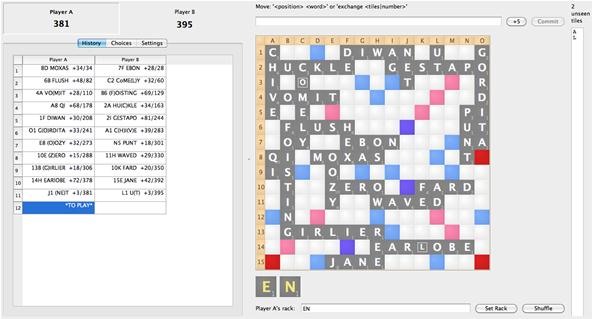 This puzzle was made using Quackle, a valuable Scrabble program for playing and learning!

And here's the answer for last week's Scrabble Challenge #8:

Q: Using the letters QFDLATS, find the highest scoring play on both the Scrabble board and Words with Friends board.

A: In Scrabble, the highest scoring move is QATS played vertically parallel to AERIE, also making QI and AE, for a total of 41 points. In Words with Friends, even though the Q is tempting, it's not as helpful here. Instead you would play either FADS or FLAT in nearly the same place, reaching down to the TWS square. The F would go next to the E, also spelling FE for a total of 61 points.

But, it's probably best to save the S for the next turn, so QAT and FLAT would be your best plays. Congrats to Amanda and James for figuring out the solutions!

Okay, so the other guy has AL in his rack. That means that 4 points of the gap will be made up by additions/deductions; so it's an 11-point move to win. I can see two ways of doing this, one of which involves a lovely Australianism, but I'm not going to spoil it for everyone else, especially seeing as I got half of the last one.

So instead I'll note that 15L NE (also forming ON and BE) would score 10 and tie: casually this would feel like even more of an achievement than a win because of how relatively rare ties are; but of course this would strictly count as a loss, as the player who was ahead before additions/deductions would be deemed the winner. It would be quite easy to devise a scenario where this tiebreak would fail though (and this is why I dislike that rule): e.g. three players with the loser making the final play and the other two tied both before and after deductions, or two players with the additions/deductions being a blank.

You're definitely right—it's an 11-point move to win the game, and there's two choices. And you're also spot on about ties being rare. I can't recall ever tying in a two-player game (though I believe I have in a three- or four-player one).

And yes—technically you would still lose the game in a tie, unless you're playing in a club or tournament. In that case, it would count as a ½ win for each player.

But in clubs and tournaments, you don't play with three or four, only two, which goes back to what you said about the general rule in Scrabble, when the one who was winning before the last move still wins. It's definitely flawed, as you noted. They should revise it to something that makes sense in a three- or four-player game, accounting for all situations. Otherwise, it's up to the players to decide, which is perfectly fine for general play.

Ok, so I can see "punted" and "en", scoring 11 points. Still looking for the second choice. That's interesting about the tiebreak rules.

All I see is punted and en, too. This is good practice for me since I always seem to lose by such a small margin. Maybe I could have been winning this whole time!

How 'bout "ute", "en", and "an", scoring 11 for the second possible play. But which word is the lovely Australianism?

Congrats. PUNTED / EN and UTE / EN / AN were the two possible moves. Seems I need to make some harder puzzles! And I believe the Australianism that James is referring to is UTE, used mostly in Australia… right James?

James is the champ; he got the two plays right away. Punted/en just jumped out at me as I looked at the board; however, I spent waaaayy too much time trying to find ute and only did so because you said there was a second play, so it became a second challenge. What I liked about this challenge is that you could work backward and know that you needed an 11-pointer in order to win. It's good strategy to think that way in a competition. I thought Ute was a native American tribe; I'll have to look up what it means in Australia. Thanks for the tip about Quackle.

Yep. UTE was what I was alluding to. I, like John, saw that one straight away (I'd been looking at hook words off two-letter words the previous day and particularly liked that one, and of course the DWS square looked tempting), then worked out how many points the target was, and then thought "that's such a peculiar play it can't possibly be the intended solution". Then the dangling D hit me.

Funny that I found Ute but not Punted.