Now that you have your two-letter words down and have practiced your skills, it's time to move on to another important part of Scrabble gameplay—the opening move. There's a well known adage that states, "The player going first will win 54% of the time—all other things being equal."

First off, if you're making the very first move on the board, you automatically get double the points of whatever you play, since your word needs to fall on the pink middle square with the black star in it—a Double Word Score (DWS).

Doubling your entire word score is always great, but not so much on the first play unless you take advantage of one of the Double Letter Scores (DLS) nearby. For instance, if you laid a J or an X on one of them, you'd at least have to have a five-letter word, like JOIST or LATEX. After doubling the 8 points from the premium letter, you add up the rest and double the total, garnering at least 40 points (without any blanks) for your first turn.

But you can even go deeper than that on the first play. What if you could use all seven of your tiles? In addition to utilizing one of those DLS squares and doubling your word total, you'd have yourself a bingo worth an additional 50 points. Even if you had the worst bingo ever, full of 1-point letters and both blanks, you could still snag a minimum of 60 points.

What if you had the best bingo ever?

Then you could pretty much call the game over, because you'd rack up a total of 128 points using the word MUZJIKS, with the Z on the DLS. If you hail from outside of North America, your highest scoring opening play would be QUARTZY or SQUEEZY for 126 points.

But most times you won't have a bingo, especially one of the three above. Which means you either go with the best word you have, or you think more strategically.

Make it tough for your opponent by not exposing the DLS squares. If you spell FORT horizontally with the F on the star square, then you just gave your opponent a great chance to take advantage of one of those DLS squares above and below the O. 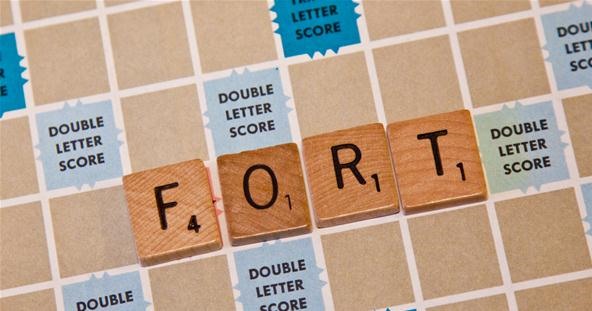 They could plop down JO in parallel above, spelling OR and JO again vertically. What does this mean? They just got 38 points for the J alone. Same goes for below, spelling EX in parallel, with FE and OX. Again, 38 points just for the X.

If you don't have anything great to lay down on the first turn, don't give anything great to your enemy, either. And don't ever place a word down that can be extended to the Triple Word Score (TWS). The next player will love you for it, but you'll ultimately hate yourself.

But what about passing or trading in letters and letting the other player go first?

Depends on the situation. It could be a great move or an incredibly stupid one.

You could have a great eight-letter word possibility, and are willing to chance that your opponent would put down the letter you need. If it's a fairly common letter, you've got a decent shot at getting a bingo on your next turn. If you don't have anything but vowels, it might be worth it to skip your turn and trade in letters, because you just can't move. Or, you could be one letter away from a seven- or eight-letter word, and want to trade just one in to see if you can get the letter you want.

So, for this week's Scrabble Challenge, let's see what you would do with the rack below. 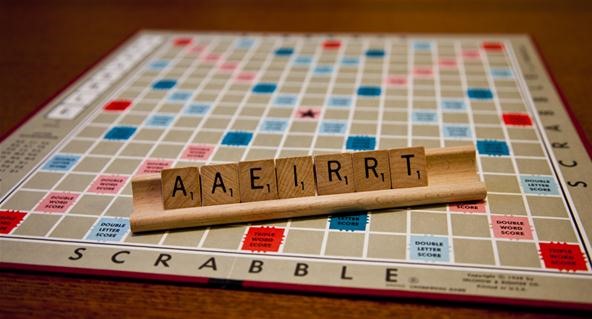 If you were the first person playing, what would you do with A A E I R R T on your rack? Would you spell a word, pass, or exchange letters? Post you answers in the comments below.

And here's the answer for last week's Scrabble Challenge #5:

I would play errata, because I personally like saying it. Not many points, but if you like it, who cares?

Very interesting puzzle. I would probably just play irater or something like that, though I'd be tempted to trade in an A and I. Definitely would want to keep the ER for a suffix later.

My answer to Scrabble Challenge #5.

The given total score of 113 points is not the maximum total
possible, as this solution totals to 124 points.

Good job. The max for individual plays is 113 points total. Looks like you played them all on the board together, which is why you're getting the higher score.

I now understand. One must assume identical preset boards for each individual two-letter word. And, then one must find the maximum points one can acquire for each of the five plays. Though it was not defined or stated as a requirement, I assume this is what was meant by parallel plays. I had not played the five words together. They were played "individually", though I can not say each play was "independent" of the other as to get the 124 points does require AB to be played before YE, and both AB and YE before EX.

(Total corrected from 122 to 124 as the A in AB (and LA) was "played" on a double-letter square. Of course, given the changes to the puzzle wording, the means of getting this total is no longer valid.)

Yeah, the directions may not have been presented well, but it was supposed to say remove the two letters before playing the next word. I think I may go in there and fix that so it's more clear.

Though, now I'm curious to if your score of 122 points is the total possible score that can me made playing them on the board without removing them each time.

Though it might not be what you consider a Scrabble Challenge, what is the highest two-letter word play possible? The play, of course, includes the points for any "also spelling" words. A different answer may be possible between SOWPODS and TWL (and, of course, the edition of the acceptable word lists).

The highest two-letter (TWL) word play possible that I found is for ZA. ZA (forming also the words CRYPTOZOOLOGY and ANAGLYPHIC) has the potential of scoring 153 points). There still may be a higher scoring word or even a higher score possible, but I have not discovered it yet.

An international crisis nearly occurred during a recent game of scrabble. Now, a hook is a legal move:

If there is the word CAT, you may add WO to the T going down, but what about this? If I have WET vertical with W at the top, the next player can add an E to the right of W to make WE- a legal hook. However, if the player adds GRACE with the E added to the right of W and the other letters above E, this, in my opinion, constitutes two separate moves- WE and GRACE. My opponent argued it was a legal parallel move. I could not agree.

Can someone clarify this before diplomacy fails?