If you haven't noticed yet, I've started dishing out some "Scrabble Bingo of the Day" articles that showcase interesting and somewhat unusual seven-letter words (or longer) that could give you an extra 50-point bonus on the board, as long as you empty your rack. So, for this week's Scrabble Challenge you'll have to get your brain in gear, because it's a tough one based of high-scoring bingo plays.

When you see a bingo on your rack, it's one of the best feelings in the world, and not just because you'll get those additional 50 points attached to your turn's score. Just being able to decipher a seven-letter anagram into a legitimate play is satisfying enough. But what if you can make a word from all of the letters on your rack and can't place it on the board anywhere? That's one of the worst feelings in the world, because you're stuck with a great play and nowhere to put it.

That's why you can't just make up seven-letter words on your rack and hope you'll find a place for them on the board. Unless you're playing first, you're going to have to incorporate it into the other words on the board anyway, whether you're extending a word, hooking it with an S, or making a parallel play. So, to be great at making bingo plays, you need to think outside of your rack.

One of the easiest ways to get a bingo is by simply hooking yours onto another word with an S, maybe even an R or Y. A great thing about hooking is that you not only get the points for your word, but also for the word you hooked onto (since you added a letter to beginning or end of it). For instance, if the word JUNK was on the board, and you had ATROPHY on your rack, you can hook the Y onto JUNK to spell both ATROPHY and JUNKY.

But when you're in the middle of the game, sometimes you just have no room to do that.

Another easy way is by using one of the middle letters in an already placed word to incorporate into yours, making an eight-letter word. In this instance, you're only making one word. But with the bingo, it's well worth it. Say the word COTTON is on the board and you had FLAHEAD. Place FLA above one of the T spots and HEAD directly below it and you've got FLATHEAD.

You can also extend words already on the board, so if the word TRUE was played, and you had PENNIES on your rack, you could add it to the end of TRUE to spell out TRUEPENNIES. Another (harder) example is with the rack PITCHKS with FOR already on the board. Place the PITCH in front of FOR and KS after and you've got PITCHFORKS.

Again, this is hard to do in the middle of the game, because words are all over the place! And the longer your word gets, the harder it is to place on the board because of lack of space. That's why you need to start visualizing words that not only extend, hook, or use an open letter on the board, you need to start thinking about parallels.

When there's a bunch of words already on the board, to make a bingo play, you're going to have to squeeze your seven letters in there somehow by making a parallel play. This means you won't just be making your base word (the bingo), but you'll be creating an additional 2 to 7 words. In the below example, you'll see that you're not just spelling the word OPERATION with your tiles, but you're also making PEP, ONES, and AD.

Which brings us to the challenge of the week. I've designed this terribly puzzling puzzle to help maximize your bingo skills using parallel plays. Check out the board below. See if you can place the letters MABGANS onto the board to spell one nine-letter word and six additional words, giving you a total of 153 points (which is awesome for just one turn).

Hint: I covered the base word in one of my recent "Scrabble Bingo of the Day" articles. 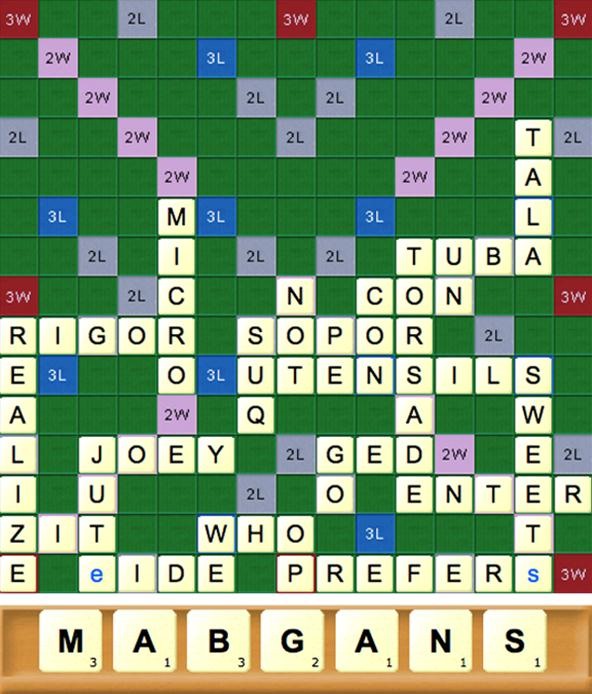 Puzzles were made using Scrabulizer, a great tool for playing around (but NOT for cheating!).

And here's the answer for last week's Scrabble Challenge #6:

Q: If you were the first person playing, and you had the letters AAEIRRT, what would you do? Play a word, exchange letters or pass?

A: Exchanging would be your best move. If you kept AEIRRT and got rid of the A, you have a huge possibility of drawing a seven-letter bingo rack when you exchange the letter. In fact, you're odds are greater than 51 percent, because you can make a seven-letter word from 48 of the unknown 93 tiles. In addition, there are also 64 eight-letter words you might have a shot at once your opponent plays.

I figured it out, WITHOUT CHEATING :) no way would i have ever figured it out with out knowing it was 9 letters long and created seven words, i went about it backwards creating the seven words...thought i was wrong at first bc i didnt think it was really a word. i checked it out and it was! solved a fun puzzle and learned a new word. Thanks :) I didnt think you'd want me to post the solution here tho, so ill keep it to myself for know

That's great! Most people would probably start by looking for the 9-letter word first, but finding the smaller words first is definitely the way to go. The bingo is certainly a tricky one! Glad you had fun and learned a new word. I'll be posting the solution in my next Scrabble Challenge, so if you want to verify your answer (sounds like you don't need to!), check back on Friday.

I finally got it, too. Though I never would have if it wasn't for that hint you gave. Very tricky. It's a very interesting word.

I don't get it. I think I'm pretty darn good at getting 7 letter words but this - I can't do this. Spelling one word is hard enough. 7 words at the same time? Damn.

Yes, spelling 7 words at the same time can be pretty touch, but that's what makes this challenging!