As much as I love Scrabble, the iPhone and Android versions of the game are just not as much fun or as fast paced as Words with Friends. I play both, but I'm most active on Zynga's version of the mobile word game because it's quicker to make moves, doesn't take as long to update, and gives more immediate competition, due to the fact that it's not as intimidating as Scrabble is to a lot of my friends. It's laid back... which means I have a bunch of games going, and I like that.

But sometimes it gets confusing, going back and forth between Scrabble and Words with Friends, because the board layout is different, as well as some of the point values for letters. Which means playing a bingo in one game might not be as worthwhile in the other. 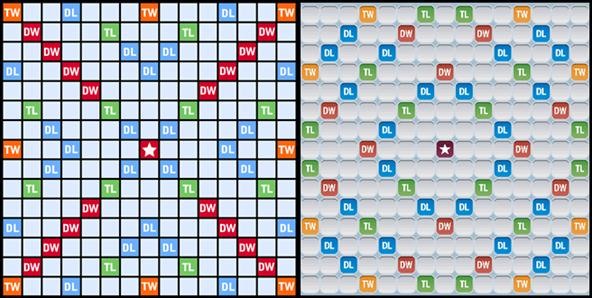 Here's the main differences between the two games:

Now, all of this matters is terms of word placement. One word could be worth over 200 points in Scrabble, but in Word with Friends only 70. That's why it's important to explore all your options. If you have a bingo (seven-letter word) in Scrabble, it's probably a good throw down, since you'll get an additional 50 points added to your score. But in Words with Friends, you only get an extra 35 points, so throwing a two-letter word like QI down in the right spot could do far more damage. 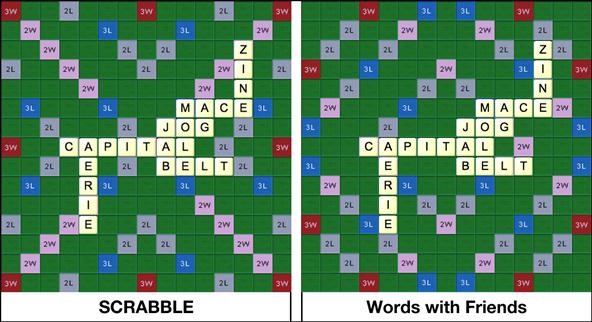 Puzzles were made using Scrabulizer, a great tool for playing around (but NOT for cheating!).

And here's the answer for last week's Scrabble Challenge #7:

Q: With the letters MABGANS on your rack, try finding the bingo word on the board using a parallel play to spells six additional words, totaling 153 points.

A: The word was MBAQANGA, which was previously featured in a Scrabble Bingo of the Day. When placed on the board horizontally below UTENSILS and above JOEY, you'd also be able to spell MO, MICROBE, AY, NOTA, PENGO and CONGE.

I'd play qat for 39 in scrabble and probably just qi in words with friends for 31. I'd save the letter s for later.

The first WWF play I considered (brain in Scrabble mode) was QAIDS going across from K4 for 51. It's a solid score, but it's probably not very efficient use of the Q or the S. But then I saw an even better play: it's about how the TWS and TLS squares interplay. *QE isn't a word, but FE is, and playing a four-letter word down from D12 would make that tile alone worth 48 points (4×(3×3+3)). So I'll go for FLAT for 61, neatly keeping my S.

Ah, qaids! I didn't notice that one. Nor flat. It looks like you got it.

You could also spell FADS for 61 but you'd be getting rid of that S, and like Amanda and James--I like to hold on to my S letters.

I'd play Qat and Flat, too. But I can't say I'm a Words with Friends guy. I don't even have a smart phone yet. I prefer the board game, but I do play Scrabble online.

probably also go with qat. though i'd probably not see flat and pick qi instead for wwf, which i play more since the scrabble app sucks in comparison.

Dictionary" (wordchecker.us). The solution would be also is invalid for WWF as it makes the assumption that FE, a word valid in both SCRABBLE

dictionaries (SOWPODS and TWL), is also in the WWF lexicon. Yet, it too is missing from the WWF wordlist.

The highest score achievable with the given tiles on the WWF board may be 51 points at K4 with QAIDS; with 48 points achievable with either FILA, FILS or FIDS and 45 points with FIAT, FITS, or FIST at L4. At 12D, one could score 43 points with DAFT (and DE).

ZINE and FE are both playable in WWF, but they're not in the ENABLE word list. The ENABLE list was just a starting point for WWF. There's an updated list of the WWF lexicon over at Zyzzyva you can check out, which was last updated on May 23rd, 2013.