Nearly every game takes strategy to win, but when it comes to games like Scrabble and Words with Friends, you've also got to have a lexically inclined mind full of wonderful and weird words. Most start out by learning all of the two-letter words in the Scrabble dictionary, then work their way up to three-letter words. But where do you go from there?

After you've got the two- and three-letter words down, you could try and do the obvious step up, the four-letter words. But there's over 4,000 in the Official Tournament and Club Word List (OWL) and over 5,000 in Collins Scrabble Words (CSW). That's a lot of words.

But then what? What if you wanted to skip all the way up to the seven-letter words to maximize the potential for bingo (bonus) plays on the board? You could do that, but the amount is even greater, with over 24,000 in the OWL and over 33,000 in CSW.

No matter which way you choose, you've got a lot of work ahead of you.

Another way to go is by learning all of the words with variant spellings. Recognizing every possible variation of a word is great knowledge for the Scrabble board. You can call them synonyms, but they're not quite synonyms, which refers to words that are spelled differently but generally mean the same thing, like BUY and PURCHASE.

We're talking about variant forms, which mean the same thing, but have a very similar spelling. They could be adaptations of a foreign word, but are usually just different methods of spelling the same word based on etymology and orthography. They are listed in the Official Scrabble Players Dictionary (OSPD), but only the most common spelling is defined and the variant forms redirect to that main entry. Example:

A more obvious example would be:

And as highlighted on Halloween, there are some words with many different variations, like JINN:

Here's another one with a slew of variant spellings:

So, this week's challenge is based on variant spellings, and consists of an opinionated question and a tricky game puzzle.

What's your favorite word with multiple variants? Share them in the comments!

Mine would have to be the JINN and GANEF families above, because of the number of variants.

In the game below, you are Player A, and you're losing 299 to 398 with a rack of EELNRV?. But the game isn't over yet. Use your Scrabble bingo skills to spell out an eight-letter word that is a variant of another word. Actually, there's a couple different eight-letter variants that you could play meaning the same thing, but only one will allow you to win. Make sure to adjust the final score correctly; the unseen tiles are EGMW. 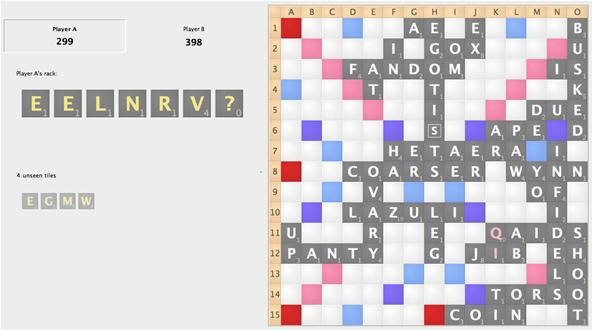 And here's the answer for last week's Scrabble Challenge #13:

A: Out of the ten racks, only 2 allow you to use all of your letters for a Halloween-themed bingo play. The highest scoring play would be from the rack CBITRUU; you can spell out CUCURBIT on the board left to right, using the C in CADETS. You can use the C already on the board as either the first or third letter of CUCURBIT for a total of 66 points. The second bingo play is from the rack OLSSSUO, which also uses the C in CADETS, spelling out COLOSSUS for 62 points.

Bonus: Since the above task was a laborious one, there was an additional rack with the letters PIRSAOE which would allow you to spell out a 765-point play on the board.

A: The huge scoring bingo play was ANTHROPOPHAGIES across all of row 15, using the three words (NTH, OP, HAG) already placed on the board. This is placed on all three open TWS (triple word score) premium squares—a triple-triple-triple play!

There's so many variants out there, it's hard to choose a favorite, so here's a few that I know off hand.

Nice. Thanks! I've got another good one...