Halloween is just a few days away, and since I've been churning out the creepy Bingo of the Days for everyone the past few weeks, it seems fitting to do a puzzle based on them. 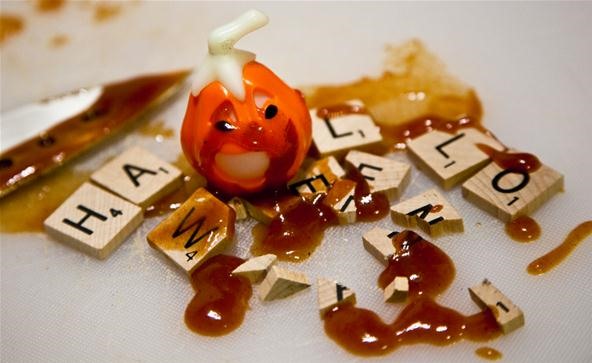 Take a look at the following ten racks.

Now, aiming for a bingo play, use the board below and try to use up your full rack for each set of letters, spelling out one of the following Halloween-related words that was featured as a Bingo of the Day word. Which ones can you find? Which ones are impossible? What's the best one? 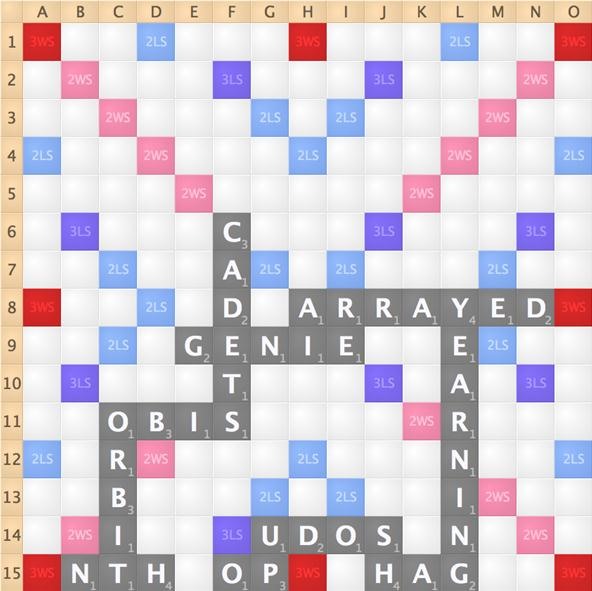 This one's going to take some time, since you're essentially taking ten turns to come up with the best Halloween worthy bingo play. If it's too much for you, I have another rack for you to solve. Use the following rack of letters and find the play worth 765 points. Yes, that's 765.

The word relates in some manner to a few of the defined words above. Can you find out what and where it is? And what it means? Just imagine if you could snag this play in a real game. It would definitely make you the winner, and possibly even give you your highest score ever in Scrabble!

And here's the answer for last week's Scrabble Challenge #12:

A: The word playable in both dictionaries is EXCITOR, which just means an exciter (one that excites). The one found in only the CSW12 is GRECIAN (a step).

Yep, that's definitely it. Good job. I wish those triple-triple-triples would actually come up in a game for me once. But it's highly unlikely. Now how about the best bingo of the board with the Halloween words? PS... I know... it's not my best puzzle to date, but it'll have to do.

I would love to one day be able to use three triple-word score squares in one turn. Like you said, it's highly unlikely. I wonder if anyone's done this in any tournaments.

I only see 3 possible bingo plays using 2 of the Halloween words listed. Using the 'C' in 'cadets' on the board. I'll omit the actual solutions in case someone else wants to chime in. :)