It's said that the player going first will win 54 percent of the time, thanks to that premium square in the middle of the board that doubles your score. If you just happen to have a bingo (a seven-letter word), then you're off to a great start. But there's a preconceived notion out there stating that if you're the first to play, you have to make a move. This is definitely not true.

Just because you're first doesn't mean you have to place a word on the board. Your first move may be to exchange letters. Imagine if your rack was AEEIIIO, wouldn't you want to get rid of a few of those vowels? Surely you can pass up a 4-point turn for a chance at some better letters.

But what about just passing? When is it a good time to pass up the opening move? Why would you want to give your opponent the first chance at a premium square? And the opportunity to control the board? And is it worth it?

In the two puzzles below, you're the first person playing. Think about what your first move would be. Would you play a word, exchange letters, or simply pass and hope for something good on the board? Post your ideas in the comments below, and click on the images to enlarge, if necessary.

Spoiler Alert: Comments below may reveal answers, so figure it out first before scrolling all of the way down! 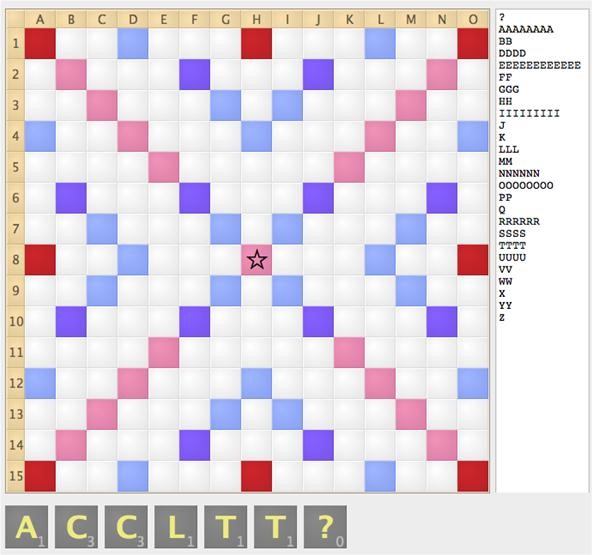 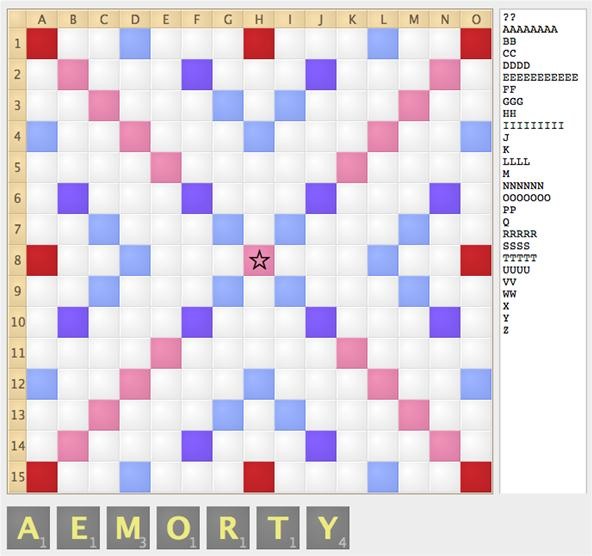 These puzzles were made using Quackle, a valuable Scrabble program for playing and learning!

** Get the answers here.

And here's the answer for last week's Scrabble Challenge #10:

Q: You're losing 72 to 161. On your rack you have the letters AE?IISS. What legal move, phoney word, or phoney-looking word could you play for 76 points to get you back in the game?

A: One option would be to play the phoney word MYIASISES starting at 11B, adding to MY already on the board. You'll get 76 points and you'll only be losing 148 to 161 now.

This happened in real life in a game between Joel Wapnick and Jan Dixon in 1995, Joel played his 7th move with the phoney MYIASISES. He was sure that Dixon knew that MYIASIS was good, but did she know the plural? It's actually MYIASES, but Joe Edley (who wrote about it in Scrabble News Issue 125) admitted that it was a hard-to-challenge phoney. "Dixon knows MYIASIS is good, but is the plural MYIASES or the play made? Unless she's 90-100% sure, she shouldn't challenge."

Jan didn't challenge and the game continued, with Joel winning 372 to 335.

Congrats to Lisa, John and Amanda who all chose MYIASISES as one of their phoneys.

Bonus question: COACOA was the word spelled wrong in the image.

Ok, on puzzle 1 I see the possibility for the word "tactical", so I'd pass hoping my opponent played an i or an a. If an i or a is not played, then on my next turn I could go for "cattle".

TACTICAL is indeed a word. In both the physical and web version of the Official Scrabble Players Dictionary, it's listed, only not by its lonesome. Search for TACTIC and you'll see it listed as an adjective after the definition. But it's still odd that the online version couldn't find it by search. They should incorporate those "run-on entries" into the search function.

Other examples of run-on entries that you won't find by searching directly for them are LANKLY, LAMELLAR, FILARIAN, WOEFULLY, PITHILY, etc.

But this is where Zyzzyva comes in handy… you can get definitions for the run-on entries by searching directly for them. It's a very useful program, way better then Hasbro's website, and you can add multiple dictionaries (OSPD4, OWL2, CSW12, etc.).

The Collins Scrabble Checker online does seem to function a lot better, but I like the layout of Hasbro's better, and it doesn't look like Collins updated the Checker for CSW12 yet.

Now that all that's said and done… you're dead on about playing TACTICAL. That's what I'd do, and I'll explain the reasoning (besides just instinct) in the next Challenge, but until then… puzzle 2!

Ok, I've got my answer for puzzle2; however, I'll wait til later in the week to share it. Your above response gave me the idea to play around with the Hasbro dictionary website and that's how I came up with my play. That said, puzzle1 just jumped out at me and I could've actually played it in a real game. But puzzle2 was a real bear, my opponent would've booted me long ago, and I possibly have way too much free time! Liked the challenge.

That's very strange about the online dictionary. Someone should design a fully searchable website that encompasses the full Scrabble dictionary along with all of the other acceptable words that are longer than 8 letters, kind of like Zyzzyva, but online.

I also got tactical on the first puzzle. I'm always iffy about straight passing up a turn because I have bad luck getting the letters I need, but I'd go for it in this case. It's a lot easier getting an A or I on the board then a F or G or something.

For the other puzzle, meaty jumped out at me. That's what I'd play. No passing. Put the Y on the double letter and you'll get 28 points. Well worth it. I'm guessing that was a trick puzzle, right? No need to pass?

By the way... myiasises... very tricky! Good to see us three (well, Lisa was first) got it. And even better to know that even the best players get duped every now and then.

It was supposed to be tricky!

"Meaty" is a good one, I didn't see that! Anyway, the best I could do within a reasonable amount of time was "yare". However, I figured there was more to the puzzle than that. So with a lot more time and totally due to the Hasbro online dictionary, the word "monetary" fit the letters. Had I thought of it myself, I would pass and hope an "n" was played by my opponent.

Meaty is a good play, but I'd play something like Moray, because I'd rather keep my "e" over the "o". I find it easier to get rid of the vowels I'm less comfortable with.

You all are too smart for these puzzles! But... there is a better play for the second puzzle besides MEATY and MORAY. Check out the full explanation on the new challenge. Lisa, going for MONETARY is definitely worth a shot, but the odds are against you.