A phoney word in a game of Scrabble is basically a non-valid word, either played or considered being played. Why? To fool the other player and go from losing to winning. It's perfectly acceptable in Scrabble play, but only if you don't get caught. If the other player challenges your play, then you'll be forced to remove it and your turn will be skipped. That right there—not fun.

Bluffing is a dangerous game, but if done well it could be an important strategy in your arsenal. Spelling out blatant lies on the board can only be done with a good poker face though, so make sure you know what you're doing. Most diehard Scrabble players (including myself) want nothing to do with fake words and will hate you for it, so watch out. 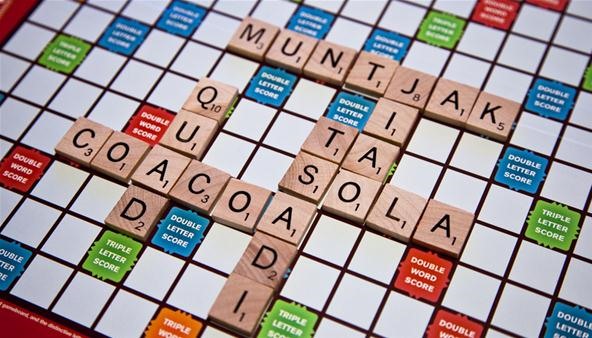 But should the other player even challenge? Only if they're sure. Three-time winner of the National Scrabble Championship, Joe Edley, once said that if you're not 90-100 percent sure, you shouldn't challenge. Why? Because it could be a legit word. Your opponent will keep their score and your turn will be skipped. One turn skipped could mean losing the game.

There's always an alternative to putting down phoney words, and that's playing words that look like phoneys to the inexperienced player, but really aren't. Study up on obscure words and force your opponent to challenge you. They'll lose their turn, and you'll rake in the points. Aside from obscure words, look into foreign words that are acceptable in Scrabble. The other players will fight with you about "no foreign" words on the board, and you'll stick to your guns and tell them to challenge you.

Here are a few words that seem incorrectly spelled, but really aren't:

And here are a few of my favorite words that can be spelled in many different ways.

Do you have any favorite phoney-looking words that you like to play?

You're losing 72 to 161. On your rack you have the letters AE?IISS. What legal move, phoney word or phoney-looking word could you play for 76 points to get you back in the game? 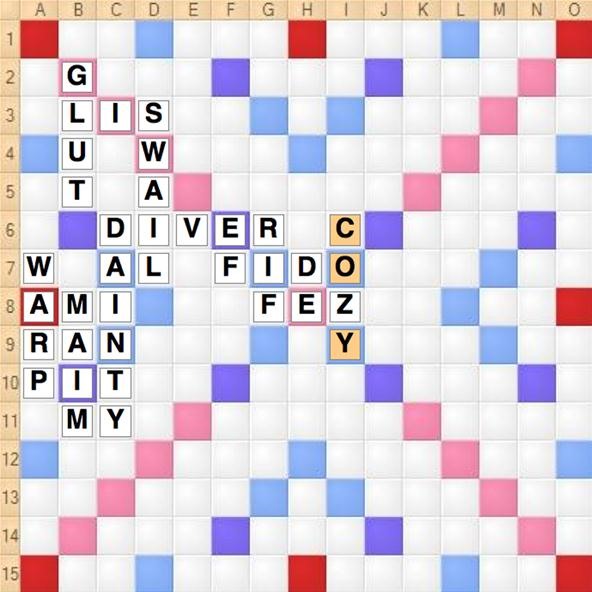 Puzzle made with cross-tables.

BONUS CHALLENGE: Can you spot the phoney word in the picture at the top of this article?

** Get the answers here.

And here's the answer for last week's Scrabble Challenge #9:

A: You're losing by 14 points, but your opponent has 2 points left on his rack. If you go out, you get those points times 2, which means 4 points. So, that means there's a 10-point difference to tie if you use both of your letters, or you can get 11 points to win the game. There are two 11-point moves to win: 3L spelling EN (also UTE and AN) or 9N spelling EN (also PUNTED).

Congrats to James and Lisa for figuring out the winning moves!

Phoney word is muntjak in the pic. It's with a 'c' right? As for the puzzle, I'm still thinking. tough.

Muntjac can be spelled as Muntjak too. The phoney was Coacoa which is Cocoa. I'm still figuring the puzzle out too. I don't see any real words for that many points.

This is definitely a puzzler. Here are my thoughts so far: It appears that the answer must use all 7 letters in order to score that many points, because even if a triple play were made off an existing word it wouldn't add up anywhere near to 76. So 76 minus 50 bonus = 26. If the word were to run across row1 and attach to glut, like aglut, that scores six with a remainder of 20. But 20 doesn't divide by 3. It could still be a word across row1, if the blank were attached to glut. That scores 5, leaving 21 which divides by 3, and 7 tiles adding up to 7 points using the double letter space. But what letter could be attached to glut and not be immediately challenged? Then I was thinking the word could be attached to the y in cozy, descending, but still can't get to 26 points. Then I was thinking it could be attached to ran, but can't square up 26 points. Hmmmm......

This is definitely a mind-bender, but you've got the right logic down. I like how you're breaking it down to core point value and finding a good place that could bank that score. Looking at GLUT was definitely a worthy shot. Putting DAISIES up there would score one point more than needed. But AGLUT would be a hard sell. You could also think about LIASES and SILESIA, with IGLUT possibly meaning some version of an IGLOO, but it still might be a hard sell, and also one too many points.

Coming up with this solution will take more digging, but I'll give a few hints—you'll only be creating one word, not multiple words, so that means no parallel plays. And the word in question is indeed a phoney word, a little bit better than AGLUT and IGLUT.

That should keep you from trying to throw down more than one phoney in a single turn. Figuring out one decent phoney is hard enough!

Interesting. I would not have guessed that SILESIA was a valid word. And it's clearly not the solution on two counts (it only scores 75 and it forms two words), but 12C SILESIA makes a good enough phoney (DAINTYS) that the risk would be that they'd challenge for the wrong reason!

Similarly, the rather too obvious misspelled diacritical mark H7 DEAIrESIS (85) isn't the solution because it would form AY or EY.

So I'm liking Lisa's analysis of the board — and scientific-looking words are always nice phoneys! — so to vary things a bit, I'll chuck in MYSLIAISE, "to negotiate after a hateful fashion".

And no comment about phoneys is complete without confession time: I tend to steer clear of them, but one time when I was playing in Welsh, I passed off something as a present subjunctive of a verb when I knew it was a letter out. It's really much easier to get away with phoneys in languages with a healthy number of rarely-used verb endings.

Thanks for the hints. I had given up, but will give it another shot. So given the hints, it seems the only possible play is off "my". That would add up to 13 points, double to 26, and bonus to 76. Searching my trusty OSPD, how about "myiasties" or "myasities" or "myiasises" or "myiasites" for phoney versions of legitimate words myiases or myositises.

I think you both (James / Lisa) have the right idea with My. The math adds up right. James, your definition of Mysliaise was great, but I think I'll have to go with either Myiasises or Myiasites. They both look pretty good to me. If I didn't know better, I'd leave them on the board without challenge.

Whoa. Never seen a puzzle like this before. I'm with John and Lisa on either going with myiasises or myiasites. Those look like the best two options. Of course, I never would have thought of them if these comments weren't here!

You all were definitely looking in the right place with MY. The best possible solution was MYIASISES, which Lisa mentioned and John and Amanda agreed with. MYIASIS is a word and the plural form is MYIASES, but it could easily be mistaken as MYIASISES.

But it all depends on who you're playing against. One phoney word could be obvious to one player, but could totally fool another, so a lot of the phoney words mentioned by you all are good possibilities. James, I also like your definition of MYSLIAISE!

This example actually came from a real game. Check out the next challenge to see a short description on the game (in which the person playing the phoney word actually won!).

This is nuts. I have a hard enough time coming up with legit words.