Remember the firestorm SCRABBLE Trickster caused nine months ago? SCRABBLE enthusiasts across the world were outraged when Mattel created a game that would allow proper nouns to be acceptable words of play. Essentially, it was a dumbed down, youth-friendly version of the classic game they've all come to love. Luckily, it was just a spinoff game—not a replacement. The same can't be said of the new edition of Collins Official SCRABBLE Words. 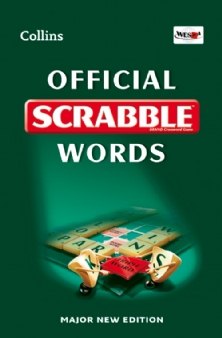 Collins Official SCRABBLE Words has recently been updated with nearly 3,000 new words, an addition sure to lead to civil unrest in the SCRABBLE community. But why? It's not uncommon for new words to be added to a SCRABBLE dictionary.

In fact, Merriam-Webster, publisher of the Official SCRABBLE Dictionary in North America, is always on the lookout for new words to add in their next edition. Their citation editors constantly track new words from all English dictionaries, and once the word is cited enough, it becomes eligible for consideration in SCRABBLE. But it's a long process; the current SCRABBLE Dictionary, 4th Edition (OSPD4) was published back in 2005, along with the Official Tournament and Club Word List, 2nd Edition (OWL2).

But Collins, which is used in most English-speaking countries except the U.S. and Canada, is a bit more lax in its approval of new words. Its previous edition was already 25 percent larger than its North American equivalent (OWL2), with words like KABELJOU, BOEP and JA listed.

1993 World SCRABBLE Champion Mark Nyman said about Collins: "It's like the 'bible' really for Scrabble players. It's what we use to avoid any major arguments. It's fundamental, really." And now this fundamental Official SCRABBLE Words book has grown by nearly 3,000 additions, including such words as FACEBOOK, MYSPACE and even GRRL.

What is GRRL? I can understand the addition of FACEBOOK (though not the moribund MYSPACE), because of its GOOGLE-like similarities; Just as you could GOOGLE somebody, you could FACEBOOK somebody. But GRRL? Slang has always been welcome in SCRABBLE, but one would think such absurdities as GRRL—defined as a fierce and feisty woman from Urban Dictionary—would be excluded for sure.

It's enough to make you cringe, innit?

But luckily, not all of the additions were cringeworthy. There were some wonderful additions that even North Americans would love to see in the upcoming OSPD5.

A few new "Q without U" words have also been added: FIQH (Islamic prejudice) and QIN (Chinese musical instrument). While there aren't many Q without U words, each time a new one makes it on the list of approved words, it almost seems like the 10-point value of the letter should be reevaluated, since those point values were specifically issued because of letter's difficulty. If more words exist using that letter, then the point value should decrease, no?

To see a list of some of the other words updated, check out this PDF from the initiation kit.

None of these words have made it to the Collins widget, but it will surely happen soon.

Some words that didn't make the cut that I would personally like to see are:

Are there any that you wish would have made the cut?

Those really are shameful additions—biach, grrl—considering they don't have vog (a real word). My questions is, who approves these words? Is Scrabble in charge of doing so? What is the process for what is deemed acceptable and what's not?

I believe Merriam-Webster is responsible for adding words to their Official Scrabble Players Dictionary, in conjunction with the NASPA Dictionary Committee. They scour the newest English dictionaries from around the world to find common, acceptable words. NASPA is solely responsible for the words in the OWL.

HarperCollins, in conjunction with the WESPA Dictionary Committee are the ones responsible for the Collins Words List.

Hasbro and Mattel, who own the Scrabble trademark, don't really have anything to do with the dictionaries except endorsement.

You can find out more about the new words at http://www.wespa.org/index.shtml, along with the impact of the new words and 396 deleted words, including BACKPAY (which is a common word use frequently in the military).

If you can spell CHUCKNORRIS you automatically win the game forever.

I could see that becoming a rule!

Oh, and one more thing. They've become extremely PC. Now they have nauseating propaganda words like "herstory" and "womyn."