My JO was watching The Simpsons on FOX the other day, like she wholeheartedly does every evening, and I joined her, much like I always do— though I must admit, I'm not as obsessed with the cartoon family as much as she is.  Just like she isn't as obsessed with SCRABBLE as I am.

Now, don't get me wrong, I like The Simpsons— it's just, I wouldn't go out of my way to watch it by myself.  It's more of a sociable show for me.  But I'm glad I was watching it with her that day, because in this particular episode, believe it or not, I heard the word SCRABBLE. 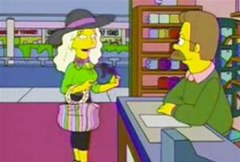 The episode was called "A Star Is Born Again," and focuses on a depressed and lonely Ned Flanders, who misses his deceased wife.  While working in his Leftorium, Ned unintentionally flirts with a beautiful shopper looking for eyelash curlers (which he doesn't have).  She enjoys his wholesome humor and asks him on a date (and buys a hair curling iron).  Ned agrees, and soon enough, he finds himself in a promising relationship with Sara Sloane (voiced by Marissa Tomei), a prominent and provocative movie star.

In the scene where Sara is acting in "The Zookeeper's Wife" at Polystar Studios, things get a little steamy on set.  Ned instantly interrupts the filming to stop Sara from bearing all.

NOTE: Some versions of this episode replace Katherine Hepburn with Angela Lansbury because Hepburn died a few months after the original air date.

POLYSTAR STUDIOS - DAY
[We see a film slate.  It's says "Sara Sloane in "The Zookeeper's Wife".]
Clapper: The Zookeeper's Wife, Scene 102, Take 1.
[The slate claps and is removed.  Sara is in the arms of Diego, in front of animal cages, housing a gorilla, bear, and penguins.]

Sam/Director: Action.
Sara: Kiss me, Diego.
Diego: But your husband's animals are watching.
Sara: Where do you think I learned to do this—
[Sara kisses Diego passionately.  Then the two rip open their buttoned shirts.  Ned jumps in, facing the camera's eye.]
Ned: Whoa, whoa, whoa, whoa, whoa... This movie's turning into SpongeBob NoPants.
Sam: Uh, cut.
[Ned approaches Sam.]
Ned: Sir, there's no reason Sara needs to do this scene in the altogether.
[Sara joins Ned.]
Sara: Sam, he's got a point.  Katherine Hepburn never showed her breasts.
Sam: There's still time.
Sara: I want a rewrite with no nudity.
Sam: Alright, but you're going to have to kiss a woman.
Sara: Deal.  Ned, we won.
Ned: Yep, now all we got to do is turn that woman into a fella and that kiss into a game of SCRABBLE.
Sara: You're so sweet to look out for me.  The public might not see me naked, but you just might.
[Sara gives Ned a peck on the cheek.  Ned is embarrassed.]
Ned: Ah, well, that's, ah... er... interesting... easy Ned, think of the Bible.

I thought the SCRABBLE joke was pretty funny, but it got me thinking about possible SCRABBLE references in other episode of The Simpsons.  I searched a little online, and this is what I found:

I never would have guessed that SCRABBLE would be so blatantly depicted in such an early episode, especially the second!  But here it is, "Bart the Genius."  The episode actually starts with the Simpsons playing a family game of SCRABBLE, because Bart needs to prepare for an intelligence test at school.  This is where the word KWYJIBO originates.

If you have trouble viewing the below video, you can use the direct link.

SIMPSONS HOME - DAY
[Homer, Bart, Lisa, and Homer play SCRABBLE.  Lisa watches.]
Bart: Come on, Mom.
Lisa: Yeah, Mom, hurry up.
Marge: Alright.  Mm.  How about "HE."  2 points.  Your turn, dear.
Homer: Hmm.  How could anyone make a word out of these lousy letters?
[The seven letters in Homer's tray are arranged in order, and they spell out the word "OXIDIZE."]
Homer: Oh, wait. Here's a good one.  "DO."
[Homer places "DO" on the board and then Lisa places "ID" on the board.]
Lisa: "ID."  Triple word score.
Homer: Hey, no abbreviations.
Lisa: Not I. D., Dad.  "Id."  It's a word.
Bart: As in, "This game is stup-ID."
Homer: Hey, shut up, boy.
Lisa: Yeah, Bart. You're supposed to be developing verbal abilities for your big aptitude test tomorrow.
Marge: We could look this "id" thing up in the dictionary.
Homer: We got one?
Marge: I think it's under the short leg of the couch.
[Homer lifts the couch, grabs the dictionary and hands it to Lisa, who reads the definition aloud.]
Lisa: "Id: Along with the ego and the superego, one of three components of the psyche."
Homer: Get outta here.
Bart: My turn.  "KWYJIBO."  K-W-Y-J-I-B-O, 22 points, plus triple word score, plus 50 points for using all my letters.  Game's over, I'm outta here.
[Bart's about to leave, but Homer grabs his arm.]
Homer: Wait a minute, you little cheater.  You're not going anywhere until you tell me what a Kwyijibo is.
Bart: Uh, Kwyijibo. Uh... [looks at Homer] a big, dumb, balding North American ape.  With no chin.
Marge: And a short temper.
Homer: I'll show you a big, dumb, balding ape!
[Homer chases Bart]
Bart: Uh-oh!  Kwyijibo is on the loose!

Bart said he deserved 116 points (22 x 3 + 50) for KWYJIBO, but actually he deserves so much more!  Simply laying down KWYJIBO without any blanks and without any multipliers, Bart would have 26 points, not 22 points.  But he also connected the "O" to the "F," spelling "OF," which would give him at least 31 points.

However, with the way Bart positioned his letters on the board, there is no way he could get a triple word score.  Placing KWYJIBO to the left of the "F" would make that impossible.  But let's just imagine he found a way.  Then there would also be a double letter score in play.  If the "J" landed on the double letter score, the "J" would be doubled first, the rest of "KWYJIBO" added up, then the word would be tripled, then "OF" would be added.  This would equal 34 (KWYJIBO) x 3 = 102 + 50 (bonus) = 152 points.

152 points is the best case scenario, but by tweaking the board a little to match Bart's placement and verbal execution. 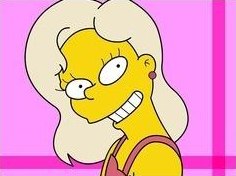 In "The Bart Wants What It Wants," Bart befriends Greta (voiced by Reese Witherspoon), the daughter of Rainier Wolfcastle, the Schwarzenegger-like action movie star.  Greta has a severe crush on Bart, for which Bart is unaware of... until Lisa apprises him of the situation.  Then, through Bart's recollection—a quick montage scene—he finally realizes the truth.

During the montage scene, Bart and Greta can be scene playing SCRABBLE.  Greta plays the word "LOVE," then Bart plays "OBLIVIOUS".  Though the SCRABBLE board is still not accurate in terms of layout, Bart did get a legitimate bingo.  OBLIVIOUS is a 9-letter word, and Bart laid down OBLIVIO to the already played "US," giving him a 50-point bonus for using all 7 letters on his rack.

The Simpsons episode "Along Again, Natura-Diddily" was pretty memorable because it was the last regular appearance of Maude Flanders.  And this time, instead of making a wisecrack about SCRABBLE, Ned is actually playing… by himself.

During a local speedway race, a squad of cheerleaders enter the stands to give away free T-shirts to the crowd, via their powerful T-shirt cannons.

Homer demands one, and Maude, who sits behind him, irritably leaves to retrieve some hotdogs.  To draw attention, Homer marks a large bullseye onto his stomach with ketchup, and the squad fires a salvo of tees his way.

Right when Maude returns to her seat, Homer gets distracted by a bobby pin on the ground and bends down, leaving Maude in the open.  The shirts hit her, send her over the edge of the bleachers and down to the concrete below—to her death. 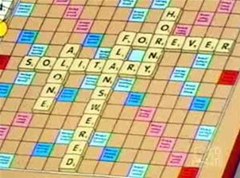 This seems to be the first time that the SCRABBLE board layout is legit.  The number of squares is correct, and all of the premium squares are presented in their proper spots. 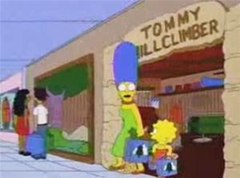 There's nothing more than a mention of SCRABBLE in "Last Tap Dance in Springfield."

While Homer and Bart are at the optometrist in the mall, Marge and Lisa go shopping for Bart's upcoming camping trip, buying him things like "Blair Witch repellent, antler saw, and deep woods SCRABBLE." 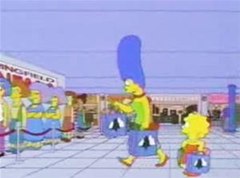 Okay, this isn't a television episode, but I thought it was worth mentioning, since I'm talking about The Simpsons.  Both Mattel (UK) and Hasbro (US) created/licensed a Simpsons commemorative edition of the popular board game back in 1997.

Mattel's version featured a colorful playing board, which was double-sided; one for regular play and one for Simpson play.  There were several rule changes incorporated for funner play.  Players could use special cards during their turn to help them or hinder their opponents.  Certain "Simpsons" branded words, like KWYJIBO, are permitted on the board.  Also, the bonus squares on the playing board are arranged differently, which could very well make the above KWYJIBO debate actually work.  I'm not sure though, since I do not own the game. 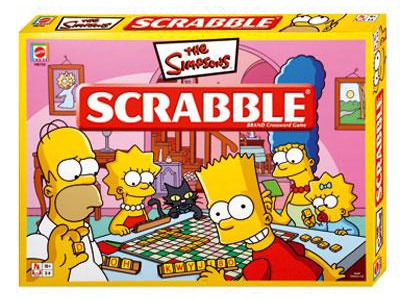 Hasbro's version (which was actually made by Sababa Toys) came with a back and white rulebook, 100 yellow tiles, yellow plastic pouch, yellow tile racks, cardboard characters, and a Homer-shaped board.  The characters had special actions and rules, specific to each one.  The "Simpsons" branded words also are fair game, along with names and bonus points for spelling them.  This edition was exclusively sold at Borders Books. 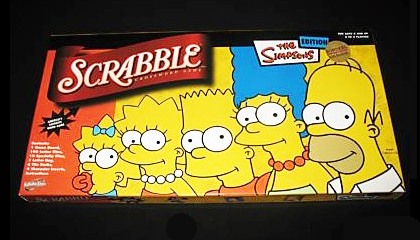 Here are the specifics for the special actions of the Simpsons character tiles:

If you're interested in trying these games out, here's where you can get them:

* Thanks to The Simpsons Archive for easy searching of all the episodes.  It's the "Internet's clearinghouse of Simpsons guides, news, and information".

this is amazing. weird, but amazing. don't think the game would be better than the scene-it game, though. regular scrabble is the best way to play.

It's really shocking that the Simpsons' would play scrabble..heheheh..