I love SCRABBLE, but sometimes it's hard to find an opponent who'll play a classic, tournament style game in person. Don't get me wrong—I play on the computer and iPhone all of the time, but it's just not the same as an in-person match. This leads me to stray every now and then, checking out new word-friendly games with a fast pace and interesting twist. And the most recent one was nothing like SCRABBLE, and I don't mean that in a bad way.

It's called Clockwords, and you can try it out yourself right now—it's freely available on the web as a Flash game. But don't expect grids and letter squares. Expect something more visual—something oddly steampunk, set in Victorian London. 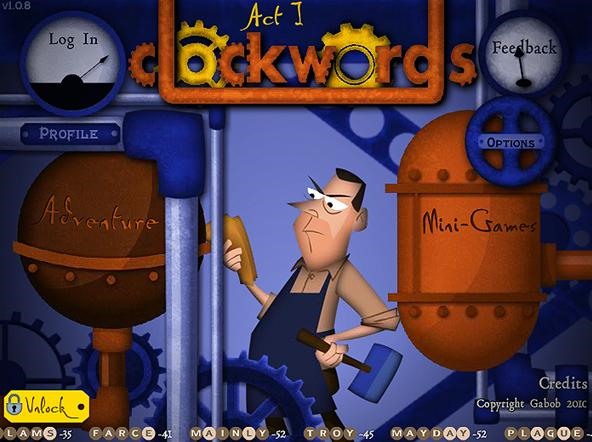 If you have the time, there's a intro to watch—but if you're as word-hungry as me, you'll probably just want to skip it and get right to the word-building action. 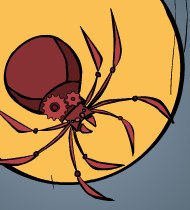 In summary, you're a genius inventor who's stumbled upon some plans for a mysterious machine—a contraption that runs off the power of language. But this machine could be dangerous, maybe even a weapon, and you have to finish building it to find out. Like all ingenious inventions, someone is out to steal your secrets, and a rival inventor sends Cronos-like mechanical insects to infiltrate your lab and grab your decoded documents. Luckily, the machine's got some functional self-defense mechanisms equipped and running—but you have to provide the bullets!

I skipped the Prelude game and went straight for the newest one, Act 1, so this article is really about Act 1, though you should (and I will) play both.

PLAY THE PRELUDE AND ACT 1 NOW!

Though it seems complex, the idea is simple—use words to destroy invading bugs.

In Act 1, when you see insects crawl across the top of the screen, you need to type in a word—any word—3 to 15 letters long. If you used a valid word (and not a previously used word), when you hit enter the letters will get sucked up into the machine and shot out its cannon, taking out the mechanical bugs one by one. If you use the letters that are shown from inside the boiler, you do more damage.

But maybe it is a little more complex than simple...

The machine is powered by words, and inside its boiler is a bunch of letters. You can return letters and buy new ones with "secrets", though you need one secret remaining at all times; What would the mechanical arachnids have to steal then? Once you've gotten the boiler full of the letters you want, it's time to move on to the next level. 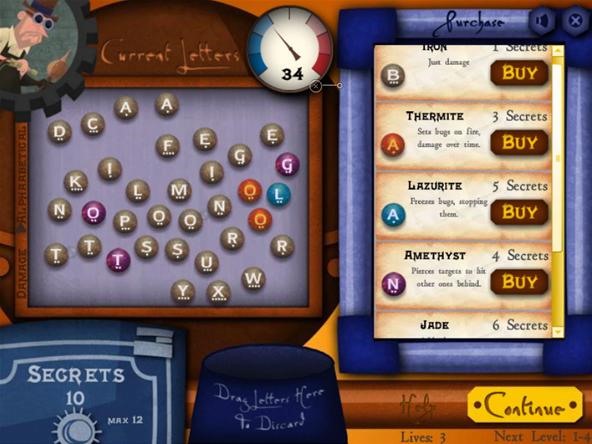 As the mechanical bugs walk across the screen, the boiler automatically spits up a letter or two into the chambers. Then, you build words (any) using those letters. The letters not found in any of the eight chambers are considered blanks, valued at 1 damage point each. On your rack you may see a bonus length incentive which forces you to build longer words for more damage. When you build a word and hit enter, the machine takes those letters and shoots them out as damage points (or shall we say pesticide?).

It's a fun, fast paced alternative for the SCRABBLE lover, but could be kind of boring at times. Either you're throwing down junk 4- and 5-letter words, working on speed rather than smarts, or you're trying for the 15-letter words with more bonus points, but then you always seem to be ahead of the swarm. But still, the latter is better. After all, building longer words keeps your mind sharp and helps you with your vocabulary, possibly training you for SCRABBLE bingos!

And here are some of the bonus letters you can purchase in the boiler room:

It's not SCRABBLE, but it's great for those word geeks looking for more video game-style visual stimulation.