The first effective local anesthetic ever was cocaine, obtained from the leaves of the coca plant, and it's still legal for medical use. But cocaine tends to cause intense vasoconstrictor activity and sometimes toxicity in the cardiovascular system. To reap the benefits of cocaine as an anesthetic, less destructive synthesized versions were created, such as amylocaine, benzocaine, procaine, proparacaine, lidocaine, lignocaine, tetracaine, xylocaine and eucaine—a crystalline substance with the formula C15H21NO2.

Today, eucaine is rarely used in humans, except in dentistry. It can produce internal effects that resemble an overdose of cocaine, which must be treated with strong coffee, alcohol, digitalis and strychnine. Eucaine is used more frequently as a local anesthetic in veterinary medicine, because it does not produce primary vasomotor constriction nor vaso-paralytic after effects.

The chemical structure for eucaine. 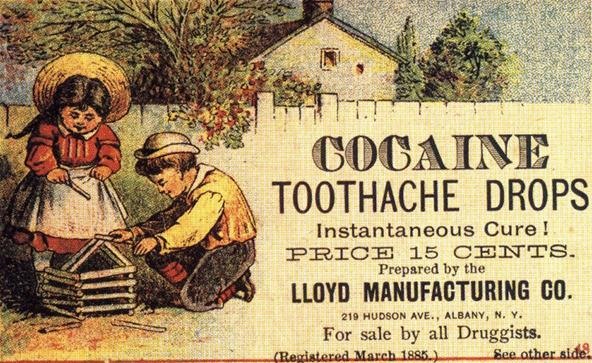 Cocaine was used in many things back in the day...
Photo by KiloByte