The definition for coxswain could be pretty confusing if you don't know what a coxwain is, but perhaps even more confusing is the fact that coxwain is not an acceptable word in Scrabble, even though in the definition for coxswain, coxwain is not regarded as a proper noun. Yet another thing that's confusing about this is that the Official Scrabble Player Dictionary (OSPD) defines coxless as having no coxswain, where "coxswain" is regarded as a noun—a person, though the dictionary refers to it as a verb.

With that to ponder, let's get back to explaining coxswain. A "coxwain" is a person responsible for the navigation and steering of a boat, usually a racing boat. In rowing, they usually sit in the stern section of the vessel and have the duty of coxswaining, i.e. steering the boat and coordinating the power and rhythm of the rowers. In the picture below, the person on the far left coxswains. 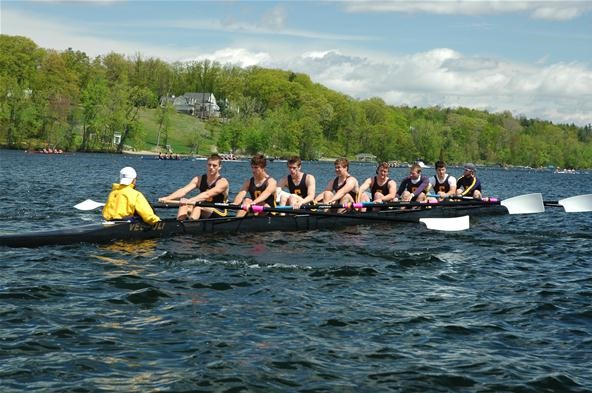 Now, back to explain the confusing part. The OSPD is not meant to be an extensive dictionary. It's meant to compliment the game of Scrabble, for learning new words and looking up challenges. The definitions are always the most popular usage, though a word may actually means multiple things. It's what makes it so compact.

So, outside of the OSPD, coxswain and cox can both also refer to the person, as in coxwain, not just the action. Coxswain and cox are therefore both verbs and nouns. And all three terms can refer to any skipper of any small boat, not just rowboats. Coxswain is also used by the Royal Navy and the United States Coast Guard for ranks and badges.

In the above picture, the coxwain (also coxswain or cox) is on the far right.

The picture above is of a female rowing team, with the person on the far right coxswaining.