Could Nigeria add SCRABBLE to the list of games at their National Sports Festival in 2011?  No one knows for sure, but it's definitely a possibility since SCRABBLE was among the competitions of the biennial 10-day sports fiesta in the past.  In 2009, at the 16th Nigerian National Sports Festival (NNSF) in Kaduna, SCRABBLE was finally scrapped from the list of games, but some wish for its 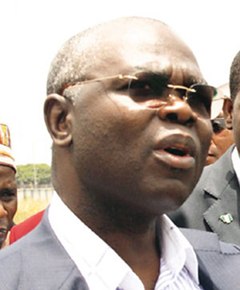 Alhaji Isa Ibrahim Bio (pictured right) was once Nigeria's Minister of Transportation, appointed by Nigerian President Umaru Yar'Adua in late-2008.  He held this position for just over one year, until Yar'Adua stepped down as President for health reasons, making Vice-President Goodluck Jonathan (pictured below) acting President in February 2010.  Bio dissolved the cabinet in March and took on a new challenge: Minister for the National Sports Commission (NSC).  Yar'Adua passed away in May. 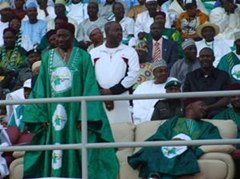 One of Isa Ibrahim Bio goals as the Sports Minister of Nigeria is to reform football (soccer) in the country.  He recently met with FIFA for assistance, and with Nigeria's early exit from the World Cup, how could they say no?  But as Bio focuses on football reform, Ibukun Faloye wishes for something else... SCRABBLE.

Fayole is the Managing Director of Dannoff Nigeria Limited, official sponsorship consultant to the Nigeria Scrabble Federation (NSF), and he's asking for SCRABBLE to be added to the list of games for the National Sports Festival.  Fayole claims that SCRABBLE is the only sport in the country that is dominant in Africa.

"We have won eight out of nine African championships since 1994. We came second only once to South Africa in the 2002 edition held in Nairobi, Kenya.  A sport like that should not be scrapped from the National Sports Festival.  Instead it should be pushed to become a scoring event in the All Africa Games and Commonwealth Games to deliver medals for Nigeria." 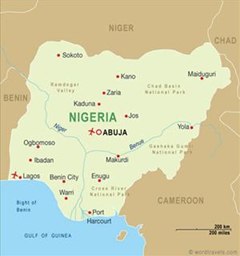 SCRABBLE in the country could help keep children out of trouble.

"Scrabble has a subtle way of refining bad children and keeping those interested in the sport from crime.  It is a way of curbing restiveness and crime in our society."

He also said tournaments abroad will not be stressful for players, as long as there is adequate sponsorship.  He stressed that Wellington Jighere, a university student who represented the country in Malaysia last year, paid over N300,000 (naira) for his plane ticket alone, which is the equivalent of almost $2000 US (dollars).

Fayole, a SCRABBLE player himself, has won bronze and gold medals in the Masters event in SCRABBLE for Ondo State at the National Sports Festival in Abuja in 2004 (14th NNSF) and Ogun (Gateway Games) in 2006 (15th NNSF).

"Nigeria has a massive comparative advantage in the game of scrabble at international championships and all our current international players were developed through the scrabble federation here."

If just a small portion of the billions approved for football each year was rerouted to SCRABBLE and other sports, Nigeria could prosper in African sports competition.  Maybe even globally.