If you know what these mean, then you probably spend way too much time on the internet.  If you're as bewildered as I was, these words actually mean something in leetspeak.

So, what is leetspeak exactly?

It's internet slang.  A geek alternate alphabet.  Web words.  A language only gamers and hackers know.  A specialized form of symbolic writing.  A code that implements various ASCII characters.  In its most rudimentary form, leet can simply replace letters with numbers (4 for A, 3 for E, etc).  To give you an idea, here's "leatspeak" itself in its various forms:

But what does this have to do with SCRABBLE?

Wiremelon LLC, based out of Colorado, has made their own version of SCRABBLE tiles called L33T Tiles.  They are a replacement tile set for SCRABBLE and other word games geared toward so-called "leetspeakers".  A perfect way to blend your two favorite things together — internet and SCRABBLE.

The L33T Tile sets consist of 103 tiles and does not need to be combined with any other set.  Below is the set distribution. 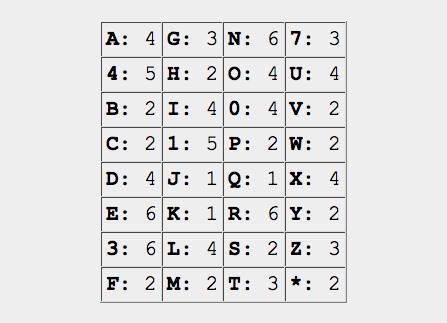 There's even an accompanying dictionary you can buy or download for free in PDF.

I found some SCRABBLE game pics that have actually used these tiles; check them out below to see what a game of L33t SCRABBLE looks like.

If you think you want a set of these L33t Tiles, then you better hurry, because they aren't being produced anymore, and they're only 3 bucks!

CLOSEOUT NOTICE:  We are closing out L33T Tiles inventory! The sets are no longer bagged, they will come in a thin plastic container as shown below. Take advantage of our inventory closeout sale to get cheap L33T Tiles to play SCRABBLE with, for craft purposes, or just to rub gently against your skin. 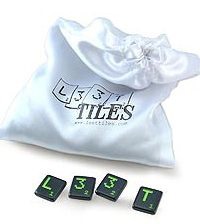 If you want to perfect your leet before mastering it on the SCRABBLE board, I found this cool website that will convert regular English to leetspeak: Leet Speak Translator.