When I heard that a man wearing a pink wig and matching PVC dress won the 2010 National Scrabble Championship yesterday, I wasn't that shocked.  After all, it was Halloween.  But it turns out that it wasn't just a Halloween costume.  In fact, it's a way of life for this champion scrabbler.

Mikki Nicholson, 32, from Cumbria, was crowned victor at the 2010 NSC (UK) in London on October 31st, beating four-time champion Mark Nyman.  He (she?) played the word "obeisant" (showing reverence or respect) in the cliffhanging fifth game, clinching the win (see the complete game here). 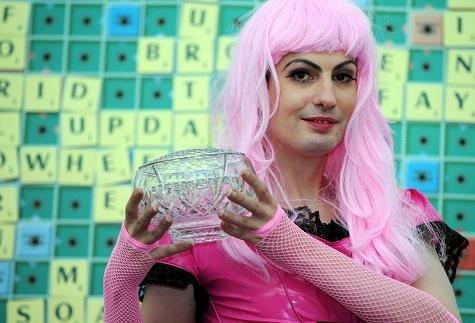 Mikki claims to have been diagnosed by a psychologist as a woman trapped inside a man's body, but has not undergone any surgery (yet).  He (she?) appeared for the final championship game with lipstick, manicured nails, and a hint of stubble. His (her?) pink plastic dress was trimmed with black lace and completely fitting for Halloween, but completely distracting for a Scrabble tournament.

Perhaps Nyman lost because he was blinded by the bright pink colors across the board.  Maybe he should have dressed up as George Bush.

But, really— this doesn't matter to me.  Gays and transsexuals can play Scrabble just like everyone else.  What's bothers me is the fact that Mikki had only been playing Scrabble for 5 years, whereas Nyman has over 30 years experience.

Nicholson said she caught the Scrabble bug after discovering the word game on the internet, but admitted ahe still went for days without laying a single tile.

"It was a big challenge but I wouldn't have entered if I didn't think I had a chance of winning," said the transsexual from Cumbria, who was wearing a pink wig, matching plastic pvc dress and lipstick during the final, held in London.

"I'm thrilled to have won and I can't wait to celebrate."

"There are weeks when I don't play Scrabble at all but then all of a sudden I get the bug and can't stop playing."

Nicholson, who will now spend the £1,500 prize money on a trip to Malaysia to compete in December's Causeway Scrabble Challenge, said the game required someone intuitive and good with numbers.

"People think Scrabble is just about words but it's the numbers that win the game, so a sound mathematical brain is an advantage," she added.

"The best word I played was 'inficete' [not witty] as it changed the flow of the game and my best move was when I played 'tenor', as it allowed me to open up the board for me to play a high-scoring K."

Other words that proved significant in the final included 'oceanaut' [undersea explorer], 'winna' [will not] and 'nads', slang for testicles."

But despite Nicholson's victory, Nyman, 44, a player with 30 years' experience who has appeared on Dictionary Corner on Channel 4's Countdown, still achieved the highest scoring word in the final game – "updates", worth 105 points.