Last week, I started a weekly feature on Scrabble World called Scrabble Challenge, where you can solve a few (hopefully) challenging word puzzles. Normally, these will be on Fridays, but today I have a potentially unsolvable puzzle for you to try and solve, in addition to the upcoming one...

Four years ago, a horrible disaster happened on I-35W in Minneapolis, Minnesota. The entire interstate bridge above the Mississippi River broke into sections and collapsed into the water during bumper-to-bumper rush hour traffic. Concrete, metal and vehicles crashed into the river, killing 13 people and injuring 145.

At the start of last week, the I-35W Remembrance Garden along West River Parkway opened to the public, which sits just across the street from Gold Medal Park in the Mills District. The garden contains a memorial dedicated to the fallen victims and survivors of the bridge disaster, consisting of 13 pillars that represent the ones lost in the accident, and a standing black granite wall with the name of each survivor inscribed. Also on that wall, a message made of stainless steel letters:

"Our lives are not only defined by what happens, but by how we act in the face of it, not only by what life brings us, but by what we bring to life. Selfless actions and compassion create enduring community out of tragic events." 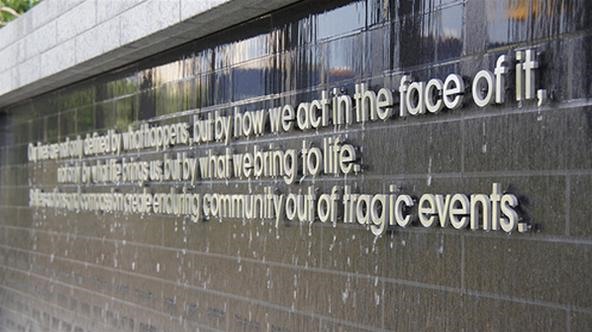 Less than two days after the opening of the Remembrance Garden, vandalism struck. Thieves stole 22 out of the 179 letters above, as well as some punctuation, causing outrage in the surrounding neighborhood. The estimated damage is said to be about $4,000. But what remains a mystery is why the thieves only stole 22 letters, and not all of them.

And this is where Scrabble comes in.

The mayor of Minneapolis, R.T. Rybak, has condemned this act of vandalism as "a single act of remarkable ignorance" and asks that those who stole the letters return them immediately. But that is doubtful to happen. Instead, police and city workers are hoping that the thieves had a reason for taking only 22 letters from the memorial. Scrabble boards were laid out in city offices to encourage word enthusiasts to help crack the code.

What were the missing letters? They were (in all lowercase):

Many have tried to de-scramble the puzzle, but so far the closest and most interesting solution from Scrabble lovers has been Liam Flahive's suggested message from the alphabet thief.

Would somebody hate the memorial so much that they would steal letters to send a secret message to the city of their distaste for the steel structure? I doubt it. And still, as interesting as the above solution is, it still falls flat.

"W.W" could be the thief's initials, or a message to someone with those initials directly, but in this case, the dot from above the I was used as a period, instead. And it's missing another period. Plus, the I would remain without it's dot, creating an odd balance between the letters in any hidden message. Also, all of the letters were lowercase, but in today's day of gimmicky writing, that doesn't matter very much.

This jumble will unlikely be solved, unless someone is found in possession of the letters.

Because it could be anybody, for any reason, which could be...

But maybe the secret message, if any, wasn't in the letters they took, but the ones they left behind. So, to all of you Scrabble nerds out there: Do you have any idea what was the hidden message the thieves meant to send?

Try to unscramble the letters below to figure out the puzzle.

Or try and unscramble the 157 letters that were remaining:

Okay, so it's highly unlikely that anyone meant to send a secret message hidden within a 157-letter anagram, but you never know. Maybe if you saw the message with the exact placement of the missing letters (in bold):

"Our lives are not only defined by what happens, but by how we act in the face of it, not only by what life brings us, but by what we bring to life. Selfless actions and compassion create enduring community out of tragic events." 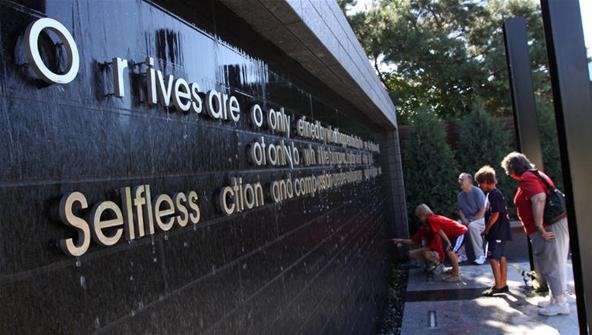 So, put your Scrabble minds to work and try and figure out a solution for this perplexing puzzle. More than likely, there is no answer. But what do you think?